For our first work party, some fabulous and hard-working folk from Vancouver came and Moved Lots of Stuff From One Place To Another.

We cleaned out most of the big stuff from the foundation, including some bees.

We found some treasures. 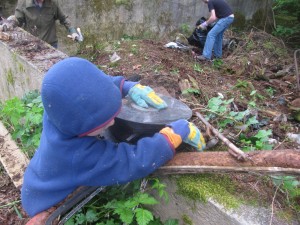 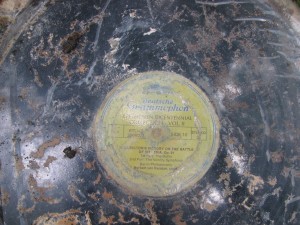 And then: moved more stuff.

All in all, a lovely time with good people.  Thanks, guys! 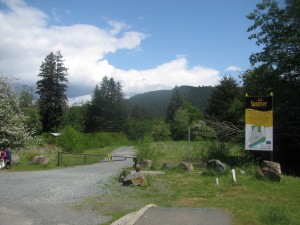 You can use the CRD Atlas viewer (<-here) to check it out. On the left side, under the ruler is the World icon, which you can use to do a Search for a street address. Our 11.96 acres are east of Philips, and both north of Shambook Drive (3 acres) and south of Shambrook drive (the rest of it).

OK, so we might have to share a bit with dog walkers from time to time, but the paperwork is complete, and we have the key to the shared gate at the start of Shambook Drive. 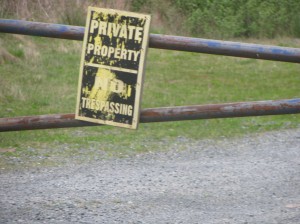 Which of course, moves us onto the next phase. Building!

But wait! Build what? Where? And what do we start with first?

Will it be a tool shed that we can get power to, so we can run tools? Do we make use of the two structures already present? Or perhaps an outhouse like the one pictured below?  It will take time before we can hook up to the city, after all. 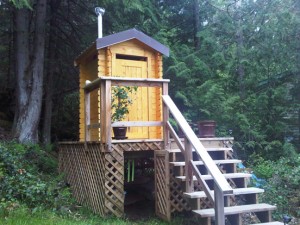 What about the storage containers? Are they too ugly to have them be visible from the road? Or do we put them where we are most likely to be doing work projects, and have them convenient? We can always move them again later after all. 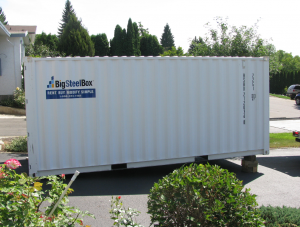 Clearly, decisions need to be made. Stay tuned, and find out what choices we made!

A little while ago, Christiana and I got the opportunity to learn how to milk cows.  Initially, the cows were a little intimidating, but as we learned how things worked and got to know the cows individually, the cows seemed to shrink in size and grow in personality and intelligence.

When one is milking, one is not only getting something from the cow, one is also giving ease from a full udder.  The cows sighed, and moved their feet as we asked them to so that we could help them become more comfortable.  They’re eager to come into the milking parlour, and not only for the small portions of grain that they’re allowed.

The milk is collected in a giant metal can, and then poured through a filter and into jars.

There’s a lot of steps, in milking, to keep the milk clean and the cows healthy.  We wash the teats, wash our hands, wash the parlour, wash All The Things.

Eventually, as we get better at this, we’re hoping to get our milk for the week in under 90 minutes.  We belong to a full cow-share, where we all split the cost and care of the cow and we each take home whatever milk is available on the day we milk.  It’s such a wonderful opportunity, to be able to try out cow-ownership with only 1/7 the cost and effort.  I have no idea whether a family cow is in our future, but it certainly seems more possible now than it did two weeks ago.  And given the sparkle in Christiana’s eye whenever we talk about milking day, I suspect that some kind of milk-beast will come home with us, sooner rather than later. 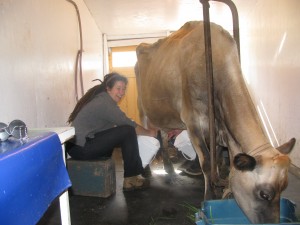