Here’s the entry to the foundation off the road, on the west side.  This is the highest part of the property, with a big sunny field below.

The foundation is sturdy and whole, though full of junk.  There’s a spot for a door, windows, and a pillar-thing for a fireplace.  Someone wrote “Foundation” on it.

Here’s an image of the car for you, Ingo!

We have a fair amount of work to do, if we want to use the foundation for anything.  Years and years of random junk and rocks have been dumped here, including a big pile of broken glass, and there are a handful of mature alders growing inside.  Still, it might be a good place to start, during the early days when we haven’t gotten animals yet.  I look forward to getting some heavy-duty gloves (and perhaps a tetanus shot) and getting started.

As a part of our Grand Adventure, we packed up three households of stuff into two shipping containers.  It was very organized, at first, and then more and more hectic as deadlines approached and only the hard stuff remained to be packed.

And now, slowly, we are unpacking and sorting.  We unpacked essential furniture, like beds and dining room tables, as soon as we had a place to put them.  Later on, we found winter clothes, some books, winter project supplies, and a few more toys for the kids.

We still have two relatively full shipping containers, though.

And lots of it is tools, and essential things for later on.  But some of it is this:

I’m slowly bringing boxes like this one to the house, and opening them, because I Have No Room For Junk, so this is probably as good a time as there ever will be to sort things like this.

Thanks for silly box-marking, Past Erin.  It would be a little less fun opening boxes labelled ‘Erin Junk’.

Over the past year, this merry band has sold our suburban houses, moved to Sooke, and figured out how to live together in a too-small house.

On Friday, our fabulous realtor held our hands while we crafted an offer on a piece of land that we’ve been looking at for a while.  We made our final agreement with the sellers last night, and are signing papers in about five minutes.

It’s a lovely almost-riverside space with fields on two levels, woods, an old foundation from the original homestead, and a few seasonal creeks.

Almost 12 acres, no buildings (except for an old falling-down barn-shed-thing.

We have been working with a co-op developer on the incorporation of our landholding division (Quiet Day Land Co-op, as per Arundati Roy: “Another world is not only possible, she is on her way.  On a quiet day, I can hear her breathing”).  Our developer thinks that we can be done in a month, so that’s when we remove subjects on the land, and focus our efforts on the working co-op (Cast Iron Farm Co-op).

But that doesn’t mean that we can’t go visit in the meantime.. and perhaps start the difficult work of naming places more imaginatively than we have to date. 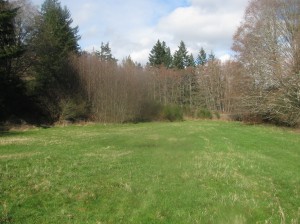 We eat a lot of yoghurt, and for a long time we bought only one brand: biodynamic, organic, raw milk yoghurt that was pretty expensive and often out of stock.  Still, it was good food, and was the only yoghurt my youngest could eat without getting horribly, disgustingly sick all over the floor, so we bought it.

A little while ago, we went to visit a small farm in Port Alberni, and she showed us how she makes yoghurt.  I had made yoghurt before, but it had never really worked out that well, and I left the farm determined to try again.

We bought the brand of yoghurt she was using as a starter, and gave it a go, and it was.. easy.  Simple.  barely any work at all, besides making sure the milk didn’t burn.  And less than half the price of store-yoghurt.

I don’t use a thermometer, I just eyeball the amount of steam coming off (optimal level: Pretty Steamy but not boiling), then I cool the milk down by a combination of waiting and pouring it between two containers.  I cool it until I can comfortably hold my finger in the milk for a solid count of 10.

I don’t measure how much starter yoghurt I use, either.  I just smear it around the insides of the jars until there’s a light coating.  Yoghurt grows from the outsides in, I learned, so putting culture on the jars seemed to make sense. 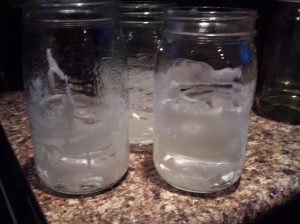 I pour the warm milk into the jars, then put it into the microwave to set overnight.  To keep it warm, I add three mason jars of boiling water, covered.  It seems to work best when there’s something cooking on the stove overnight, too, because our microwave is over the stove, but it’s not essential.

Is there a conspiracy to keep us buying expensive yoghurt, when it’s so easy and cheap to make?  I’m not sure, but I doubt I’ll ever go back to buying store yoghurt.

Some holidays pass with barely a mention, but I am usually pretty diligent about the 14th of March.

I adore living in a household of geeky people.

Small piece of news:  we have engaged the services of a highly-recommended co-op developer, who thinks that we can have things sorted enough to actually move forward Very Soon.  Meetings are going well, and everything that we learn about co-operatives suggests that this mode of business would require very little contorting to shape into the kind of thing that would work for us.  We were initially going to go with a corporate model, but after speaking with some folks that are familiar with co-ops it looked like we’d be contorting a corporate entity into something very like a co-op.  It made sense to start out with an organizational model that was closer to our desired end point.  A corporate model is very flexible, but we don’t think we’ll need all those options.

We have a name:  Cast Iron Farm Co-operative.

And now, to finish up work on those last few hard bits, for which we appear to have needed a deadline.

We are reducing our consumption of wheat, though not eliminating it.  Most of us feel swollen and yucky when we eat a lot of wheat, but no one feels enough of a difference that they have given up wheat entirely.

Good thing, because my attempts at gluten-free pizza crusts have been edible, but not awesome.

Here’s the recipe I use:

In a big bowl, mix 1 Tbsp yeast and 1 Tbsp salt with 3 cups warm water.  Add 5 cups white flour, and 1.5 cups spelt/whole-wheat/rye/whatever-other-kind-of-flour-is-around.  Mix, cover with a pot lid, and let sit in a warm place for at least 4 hours and a maximum of 24 hours.  Do not knead, do not concern yourself with it in any way until you’re ready to use it.  When you’re ready to make pizza, turn the dough out on a floured surface, and mix in enough flour to make it the appropriate texture.  Stretch it into the right shape, then add toppings and cook until done at 450 (15-25 mins).  I find that if one doesn’t oil the pan, it sticks dreadfully, and that thinner crusts work out better than thicker ones.  And sesame seeds on the crust are really nice.

For the gluten-free crust, I just substituted Bob’s Red Mill Gluten-free flour mix. It was fine, just not quite as nice. It needs to be patted in place like a giant cracker instead of rolled and stretched like a wheat crust.

I recently ran out of white flour, and so I used 1 cup of white and the rest spelt flour, and it was fine. More stretchy and squishy with the white flour, but overall it was something I’d probably do again. Once we get a grain mill, I plan to make it with 100% whole wheat – I’ll keep y’all updated.

Our stove is stupid. I have gotten to know and love many cantankerous and ornery stoves, and I usually come to love their quirks.  This one seems past redemption.

The knobs are reversed, so that we always think we’re turning on the front burner when in fact we have just burnt the bejeezus out of whatever was on the back burner:

The elements have only two temperatures, despite their knobs suggesting that they have a normal range: Scorching-Hellmouth-Cooks-Your-Food-To-A-Crisp, and Barely-Melts-An-Ice-Cube-In-Half-An-Hour.

My mounting frustration with this stove makes me daydream about rocket stoves, wood-burning ranges, and commercial-grade gas stovetops. Gas would be easy, of course. Cooking with wood would have its own learning curve, but at least there would be some skill involved instead of our current random soup-scorching.

We keep pinning our hopes for a cure for whatever is currently bothering us on Someday When We Build Our Own House And Grow Food And Everything Will Be Perfect. It won’t be perfect, for sure, but at least our stove will change. I’ll settle for that.

We each have a private space, where we can leave things and know that no one else will move them. When private spaces are close together, we can wear earphones or play music when we don’t want to talk. 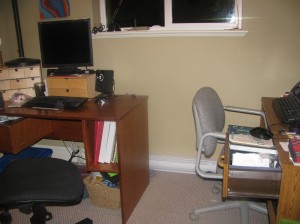 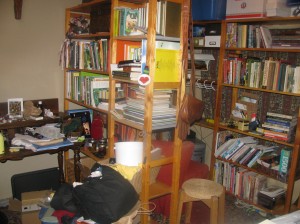 Scott and Sebastien share a bedroom that has a division of space (and I didn’t ask them if I could take a picture).

And the kids each have their own spaces.

My kids have their own slightly smaller spaces in our bedroom, but our entire bedroom is also off-limits to the other kids.  My kids (one of them, anyway) have quieter temperaments than the other two and need a place to get away. It seemed like a reasonable trade: you get the big master bedroom and ensuite, but the kids all play in YOUR room (sorry, Christiana and Tony!). We are considering raising the bed in our bedroom so that my eldest can have a place to work on projects quietly alone, but we haven’t made time for that yet.  Everyone needs a place to work.

The other place I’m often finding a need for mental space is in the kitchen. It’s not the clutter; if we’re not on top of that all the time, it gets crazy, so that’s often fine. There are a number of kids that like nothing better than to help in the kitchen, which is wonderful.. in theory. In practice, after having spent the day with short people, I’d much rather have some space to myself when I’m cooking. We have devised an ingenious plan, for the times that we Do Not Want To Answer Any More Questions: THE APRON. When someone wears the apron, they are Not Available.. for ANYTHING. Perhaps if there was a fire, or an accident with blood, the person wearing the apron may take it off, fold it carefully, and then attend to whatever needs doing, but otherwise kids have to go ask someone else. If more is needed, the person wearing the apron can also wear headphones and listen to music. These are things that one can do, when there are other adults around to pick up the slack.

We’re chugging along, contacting co-op developers, and hope to have something together on paper soon so that we can go ahead and Actually Buy Something.  More news soon, I hope!